Redeeming the Time: Gospel Perspectives on the Challenges of the Hour 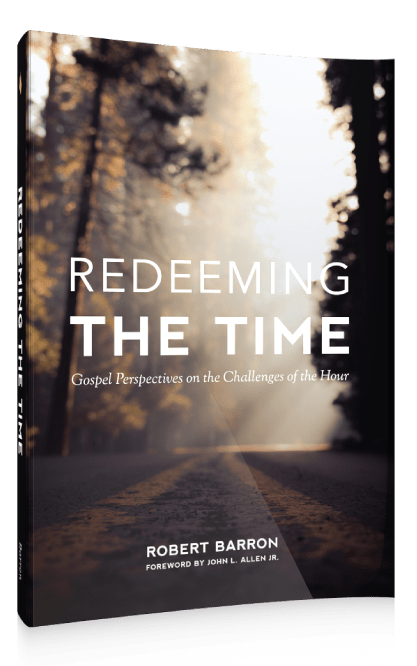 Redeeming the Time: Gospel Perspectives on the Challenges of the Hour

LIMITED-TIME OFFER - $19 (24% OFF): In "Light from Light: A Theological Reflection on the Nicene Creed," one of the Church’s leading thinkers invites skeptics and seekers to discover the intellectual richness of the Catholic faith. Walking through the ancient Nicene Creed, Bishop Robert Barron offers readers a clear and compelling explanation of the basics of the faith for a new generation, especially those who have wandered away. 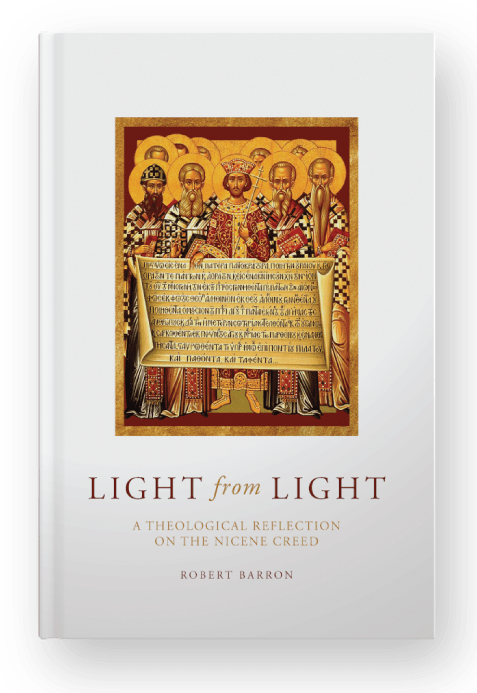 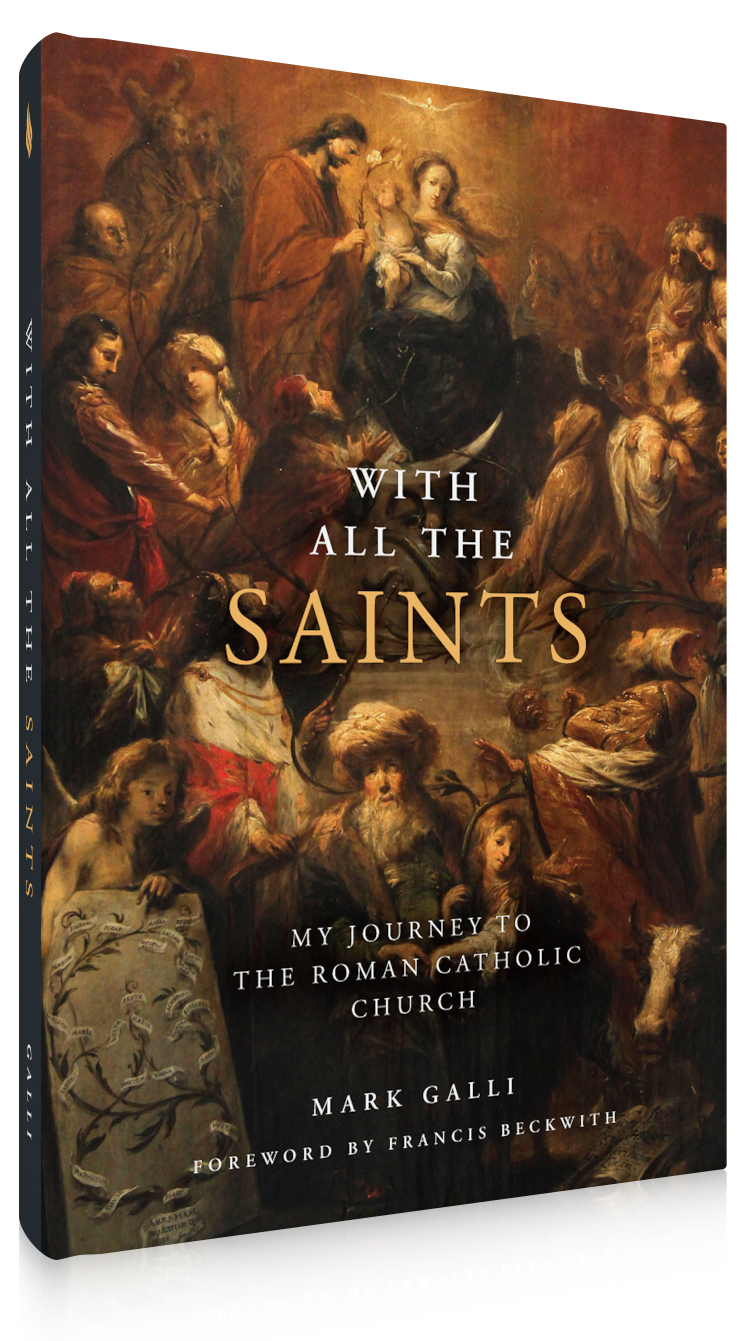 Mark Galli was the editor in chief of Christianity Today for seven years, a Presbyterian pastor for ten years, and a passionate evangelical Protestant since first responding to an altar call in 1965 at thirteen years old. But in 2020, Galli formally returned to the faith in which he was baptized as an infant: the Roman Catholic Church.
With All the Saints: My Journey to the Roman Catholic Church is the compelling memoir of one man’s search for the fullness of truth. Through honest and engaging storytelling, Galli recounts the various spiritual, theological, mystical, and ecclesial tributaries that led him to “cross the Tiber” back to Catholicism. Each tradition he passed through—Evangelical, Presbyterian, Episcopalian, Anglican, and Eastern Orthodox—he embraced without satisfaction and left without bitterness, drawing him finally to the one, holy, catholic, and apostolic Church: a Church of saints and sinners, all striving together in the great company of heaven; a Church that he could finally call home.
Honest, insightful, and entertaining, With All the Saints is a memorable love letter to Christ and his Church.
GET THE NEW BOOK!

The past several years have been a time of tremendous challenge. From the COVID-19 pandemic that afflicted the world, to the political polarization that unsettled the nation, to the division, disaffiliation, and scandal that rocked the Church, Catholics everywhere have been filled with fear, burdened by pain, and longing for hope.
In Redeeming the Time, Bishop Robert Barron follows the wisdom of St. Paul in Ephesians 5 and boldly shines the light of the Gospel into our dark hour. Sorting through our moral, intellectual, social, political, and ecclesial turmoil, this collection of essays is a timely reminder that our hope—especially when things seem hopeless—is always found in Christ and his Church.
GET THE NEW BOOK! 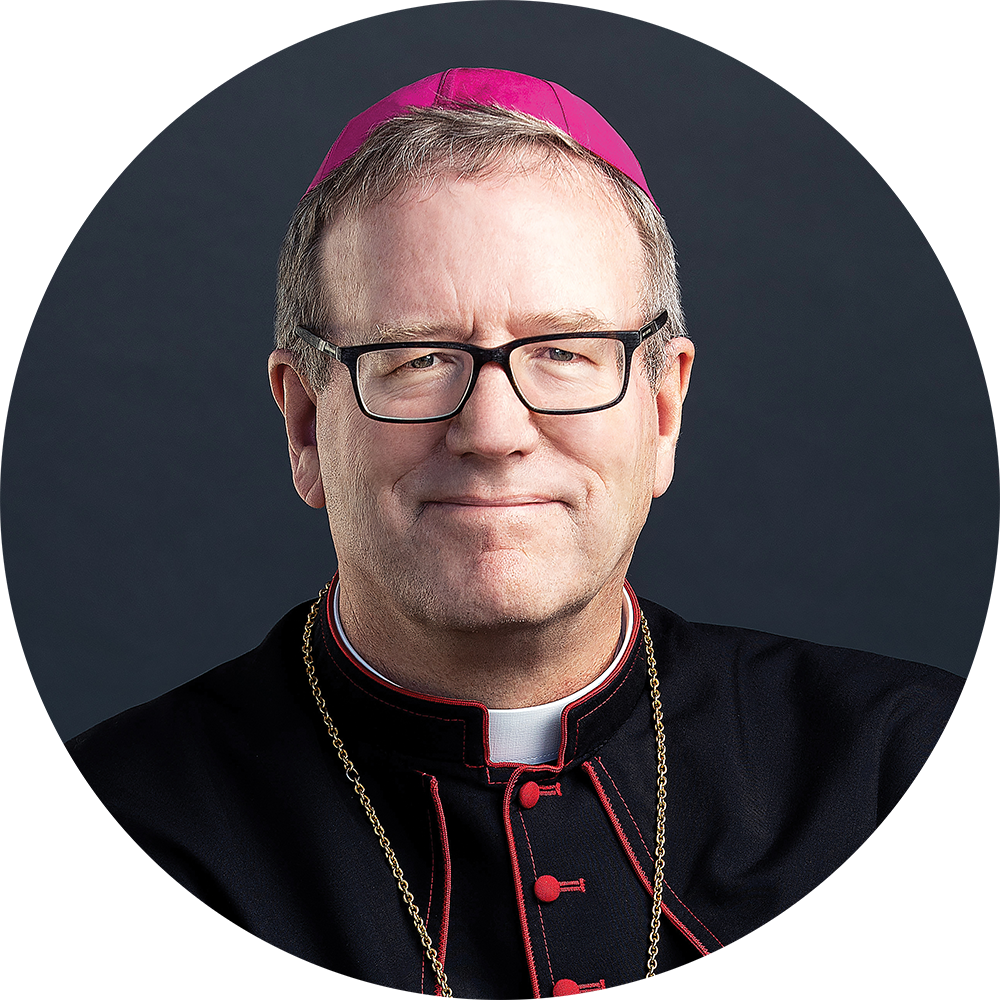 Bishop Robert Barron is Bishop of the Diocese of Winona-Rochester, the founder of Word on Fire Catholic Ministries, and an acclaimed author, speaker, and theologian. He is also the creator and host of the groundbreaking CATHOLICISM series. Word on Fire, a nonprofit global media apostolate that supports the work of Bishop Barron, reaches millions of people to draw them into—or back to—the Catholic faith.

AN EXCERPT from the FOREWORD
by John L. Allen Jr. 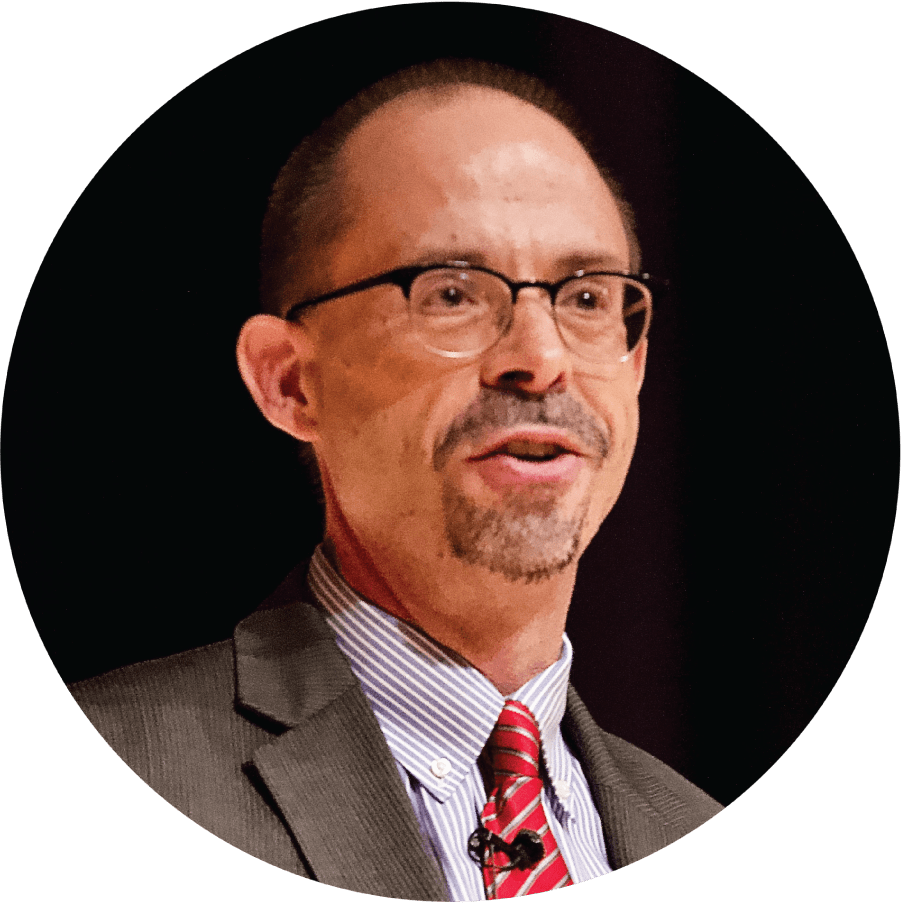 With regard to current events, the perennial temptation of Christianity is to become either too vertical or too horizontal. That is, we end up either so obsessed with otherworldly contemplation as to be completely detached from what’s happening just outside the doors of the chapel, or so invested in a social or political program as to all but ignore the spiritual dimension of human existence and destiny. The more subtle form of the same temptation, probably, is to think the solution is a neat mathematical 50/50 split, with half one’s time devoted to the here and now and the other half to the life beyond.

Naturally, the proper Catholic answer is something different entirely—it’s “both/and.” The aim is a life utterly tied up in the hurly and burly of the day, and, at the same time, totally permeated by the transcendent. Put simply, the trick is to be completely horizontal and completely vertical at the same time.

In recent Catholic life, the best example was St. John Paul II, the would-be Carmelite mystic whose entire life radiated spiritual depth, but who was also at least as well-informed and engaged in the nitty-gritty of geopolitics and the movements of history as most secular politicians and diplomats of his era. In today’s America, the best public example we have of that capacity to fully incarnate the horizontal and the vertical is probably Bishop Robert Barron, founder of Word on Fire, as this collection of essays abundantly illustrates.

Certainly no one could accuse Barron of paying short shrift to the spiritual. His best-known works aren’t commentaries on current affairs but artful expositions of the perennial faith of the Catholic Church, crafted by someone who’s clearly drenched in belief. While Catholicism has many fine evangelists, however, Barron’s particular gift is to make the Church’s timeless tradition nevertheless seem timely by addressing it to the peculiar zigs and zags of the postmodern era, from our quasi-Jansenist fundamentalism about science to our toxic addiction to snark.
At one point Barron evokes St. John Henry Newman to the effect that the Church moves through a culture like a foraging animal in a forest, taking advantage of what it can and fighting off what it must. This book captures Barron at both his foraging and his fighting best.
John L. Allen Jr.
GET THE NEW BOOK!

3 - Tintoretto and the Reform of the Church

6 - The McCarrick Mess
9 - Sowing the Wind and Reaping the Whirlwind:
A Reflection on the Irish Referendum
12 - Letter to a Suffering Church: Conclusion

17 - The Least Religious Generation in US History:

A Reflection on Jean Twenge’s iGen
20 - Spinoza, Secularism, and the Challenge of Evangelization
23 - Getting Out of the Sacristy: A Look at Our Pastoral Priorities
26 - Blasting Holes through the Buffered Self
29 - Bill Nye Is Not the Philosophy Guy
32 - Stephen Hawking: Great Scientist, Lousy Theologian
35 - Doctor Strange, Scientism, and the Gnostic Way Station
38 - The Jordan Peterson Phenomenon
41 - Listening to Jordan Peterson and Sam Harris
44 - The USCCB Meeting, Jordan Peterson, and the “Nones”
47 - What I Learned Talking with Thousands of Skeptics on Reddit
50 - Apologists, Catechists, Theologians: Wake Up!
54 - A New Apologetics: An Intervention at the Youth Synod
57 - Why Accompaniment Involves Apologetics
60 - Black Elk and the Need for Catechists
63 - Go in Haste! Be Amazed! Treasure!

69 - Social Media and the Culture of Contempt
72 - The Internet and Satan’s Game
75 - Pride, Humility, and Social Media
78 - Thomas Aquinas and the Art of Making a Public Argument
81 - Kathy Griffin and the Vanishing of Argument
84 - Violence against Christians and the Waning of Reason
87 - Love an Enemy This Lent

131 - Charlottesville and America’s Original Sin
134 - Pentecost and the Fires in Our Cities
138 - Martin Luther King Jr. and the Religious Motivation for Social Change
141 - Acknowledging an Abyss, Finding a Bridge
144 - We’re All Becoming Platonists Now—and That’s Not Good
147 - Canceling Padre Serra
150 - How the Star Wars Franchise Lost Its Way
153 - “Wokeism” in France: The Chickens Coming Home to Roost
156 - Daniel Berrigan and Nonviolence
159 - The Surprising Message of Downsizing
162 - Talking to Some Young Jesuits about Social Justice and Evangelization
165 - Peter Claver vs. Immanuel Kant

168 - Dominion, the Values of the West, and the Cross of Christ
171 - Stretching Out to Great Things: A Commencement Address for the University of St. Thomas

179 - Four Principles for Catholics during Election Season
182 - Governor Cuomo and God’s Noncompetitive Transcendence
185 - A Talk on the Hill
188 - One Cheer for George Will’s The Conservative Sensibility
191 - It’s Time for Catholics (and All Religious People) to Wake Up: The Real Danger Posed by the California Confession Bill
194 - Why We Need a Distribution of Power
197 - “Culture Warrior” and the Fallacy of Misplaced Concreteness

PART VII – FACING COVID-19 AND THE PROBLEM OF EVIL

203 - Miracles from Heaven and the Problem of Theodicy
206 - Pain Is Not Metaphysically Basic
209 - Tragedy, Contingency, and a Deeper Sense of God
212 - Should Suffering Shake Our Faith?
215 - The Coronavirus and Sitting Quietly in a Room Alone
218 - The Quarantine’s Three Lessons about the Church
221 - The Book of Exodus and Why Coming Back to Mass Matters
224 - Come Back to Mass!

PART VIII – SHINING THE LIGHT OF THE NATIONS

229 - Pope Francis and the Evangelicals
234 - Laudato Si’ Athwart Modernity
237 - Pope Francis, Fratelli Tutti, and the Universal Destination of Goods
240 - Why “What Are the Bishops Doing about It?” Is the Wrong Question
244 - What Is Synodality?
247 - The Ratzingerian Constants and the Maintenance of Harmony in the Church
250 - A Case for Priestly Celibacy
255 - The Question Behind the Question
258 - The Benedict Option and the Identity-Relevance Dilemma
261 - St. John Henry Newman
264 - John Henry Newman in Full
267 - Cardinal Etchegaray, Henri de Lubac, and Vatican II

270 - The Evangelical Path of Word on Fire
273 - he Word on Fire Retreat and God’s Wonderful Providence
276 - Evangelizing through the Good
279 - Tolkien, Chesterton, and the Adventure of Mission
282 - Confirmation and Evangelization
285 - Paul on the Areopagus: A Masterclass in Evangelization

GET THE NEW BOOK!

SAMPLE the ADVENT REFLECTIONS for FREE 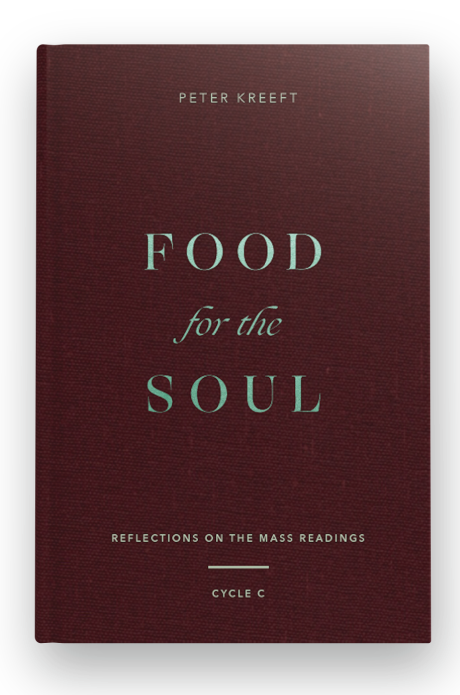 Read Dr. Kreeft's introduction and his reflections for all four Sundays of Advent. Click the button below to download a free PDF sample...

Vatican II called the Bible “the support and energy of the Church,” “the pure and everlasting source of spiritual life,” and “the food of the soul.” Yet, for many Catholics, their engagement with Scripture is often limited to what they hear at Mass—and the dull, safe, predictable homilies that obscure rather than break open up the Word of God.
In Food for the Soul, the first book in a riveting three-part series, celebrated philosopher Peter Kreeft invites the faithful—clergy and laity alike—to a heart-to-heart relationship with Christ the Word through the Word of the Scriptures. Moving through the First Reading, Second Reading, and Gospel Readings for each Sunday and other major liturgical celebrations throughout the three-year lectionary cycle, Kreeft brings the Mass readings to life with his trademark blend of gentle wit and unyielding wisdom, challenging readers to plant their souls in the rich soil of Scripture and sharpen their minds with the Sword of the Spirit.
Whether you are a layperson looking for additional insight on the readings at Mass, or a priest or deacon looking for inspiration for a homily, Food for the Soul is a gift to the whole Church from one of today’s greatest Christian writers.
GET 20% OFF! 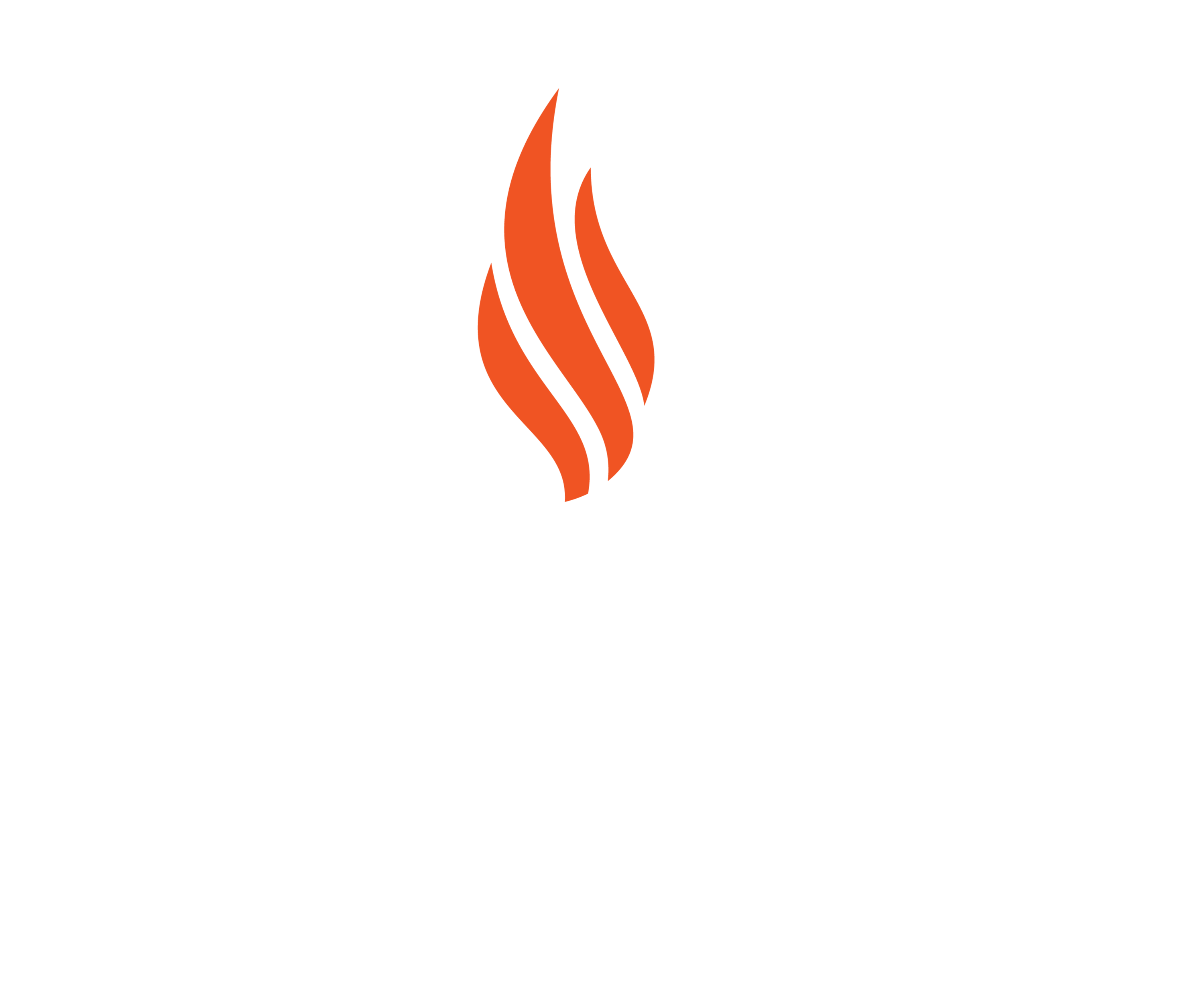